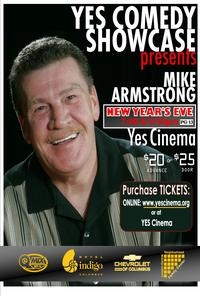 BACK BY POPULAR DEMAND!!! Mike Armstrong is a real Southern gentleman with a quick-wit about him. Frequently referred to as, "everyone's favorite former cop," Mike has been making audiences laugh for over thirty years.

With appearances on HBO, Comedy Central, the Fox and CMT networks, as well as many fundraising and corporate events, Mike is everyone's best friend while providing an event full of good, fun, (and clean) entertainment.

Mike was raised by loving parents in the conservative mid-west in a small town near Louisville, Kentucky, Mike Armstrong enjoyed a fairly normal childhood. So, what went wrong?

He’s an ex-cop - the kind of cop that most people hope for when they get pulled over. “I’d stop cars and warn the speeding drivers about the speed traps up ahead. I think that when I quit the police department three other cops lost their jobs. They simply didn’t need that many internal affairs officers anymore!” Mike and his ex-wife had a small herd of children (five). The kids are clones of their father. They’ll say and do just about anything to get attention.

From a fan of Mike’s…"Mike is fabulous - so funny, clean and just a fun guy all around - his laugh is so contagious, he doesn’t even have to tell jokes - if he just stood up there and laughed the whole audience would laugh with him and not even notice he wasn’t telling jokes. Love that guy - and his jokes ARE hilarious!"