You ever hear the one about the cop, the songbird, the psycho and the mafia princess? "Birds of Prey (And the Fantabulous Emancipation of One Harley Quinn)" is a twisted tale told by Harley herself, as only Harley can tell it. When Gotham's most nefariously narcissistic villain, Roman Sionis, and his zealous right-hand, Zsasz, put a target on a young girl named Cass, the city is turned upside down looking for her. Harley, Huntress, Black Canary and Renee Montoya's paths collide, and the unlikely foursome have no choice but to team up to take Roman down. Written by Christina Hodson and directed by Cathy Yan.

Rated R for strong violence and language throughout, and some sexual and drug material.

Read the book, see the movie!

Read Jack London's classic The Call of the Wild book and see the new movie, starring Harrison Ford. Then join in on a discussion of the book and the film in an informal setting in our Sarla Kalsi Conference Room. Book Club participants can purchase wine at $1.25 off the usual price. (There is no charge of any kind for the book discussion). Books are available at the local library and at Viewpoint Books.

Monday Mania - Purchase a Large Popcorn tub (includes one free refill) for the price of a small popcorn!

Wine Down Wednesdays - Purchase a glass of wine for $1.25 off the regular price!

Give the gift of movies this Valentine's Day!

They are perfect for the movie lover in your life. YES Gift Cards are valid at the YES Cinema box office, concession stand or bar. Available in any amount - from $5 to $250!
Please purchase Gift Cards at the theatre during movie showtimes - also over the phone for out-of-town orders!

We're always glad to see our guests at YES Cinema, but because of our liquor license, no food or drink can be carried inside. This even applies to water bottles. (Of course, we sell a variety of food and drink items - including Dasani water, and we have a water fountain)

Looking for the perfect place and space to host your next event?

YES Cinema and Conference Center provides the perfect setting for a wide range of events - from meetings and parties to special movie screeings.  Contact us at 812-350-3051 or email at yescinemaevents@gmail.com 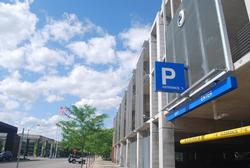 NOTE: Top floor (roof) of parking garages CLOSE at 8:00 PM and all automobiles should be off the roof of the garage by that time. Parking on all floors, other than the roof, is available 24/7.

For security concerns, no backpacks are allowed at YES Cinema.  This includes kiddie backpacks.  If guests must enter our theatre with a backpack, we will ask to keep it for them - or it may be subject to search.  We appreciate everyone's understanding in this measure to ensure everyone's safety.

What film was playing when the Great Flood of 2008 hit Columbus and knocked out our power? - The Rolling Stones "Shine a Light"

What was the first film shown at YES Cinema? - WHITE CHRISTMAS played at Christmas in 2004

When did the YES Film Festival begin? - 2010  (We moved from November of one year to May  18 months later… so we missed one year).

YESfest has screened films with major stars, such as Richard Dreyfus and Tatiana Maslany (both proud Canadians), Sean Astin, Dick Van Dyle, and Eli Wallach (in his last film)

The 2019 YES Film Festival Audience Award Winner for Short Films was given to MIDWESTERN, filmed partly in Hope, Indiana and directed by Nick Rieth, and co-produced by Hope's own Daniel Anderson

Chevrolet of Columbus - A Valued Sponsor of YES Cinema!

Visit their new facility at 2825 Merchant Mile, next to Sam's Club.

All tickets purchased are non-refundable with no exchanges. Films and Events are subject to change.

YES Cinema does not show films in 3D.